Gonna Be Some Changes Made is a song by Bruce Hornsby, and everytime I start something new I have it in my head. Naturally there are countless songs about changes, e.g. There’ll Be Some Changes Made, a jazz standard from 1921 or Changes by Black Sabbath or David Bowie respectively.

Many musicians have written songs about change. It seems that the process of change touches and moves us in certain ways. Maybe because change makes us realize that time passes by and that nothing stays as it is, not even us.

Change is also of great importance for project work., especially in the form of changing requirements. There are a number of large-scale projects in Germany and elsewhere that have suffered a great deal from a high number of changes. Instead of performing an introspection here in Berlin, why not let our gaze wander around, to Hamburg?

Of Icebergs and Mountains of Trash

Where scores of tourists are letting themselves lured into harbor tours, where piles of empty beer cans cover the so-called Sternschanze on saturday and sunday morning, there once was a different kind of mountain to be seen: icebergs. When these icebergs melted away (see above, change) the Elbe-Urstromtal formed, a geological formation later to be known as the river Elbe.

Approximately 14 500 years later a few very powerful abutters of the Elbe-Urstromtal, aka politicians, wanted even more change. No sooner said than done, a little while later one of the most expensive skyscrapers in the world towered on the banks of the Elbe: the Elbphilharmonie. More precisely, what did tower was only what had been finshed 14 500 after the glacier meltdown (and 12 years after the Senate of Hamburg had officially green-lit the project Elbphilharmonie). Side note: Towering is the wrong word here, as is skyscraper: Even when completed the highest point of the roof (which does resemble a visualized Earned Value Analysis quite a bit) will be 360 feet high.

Change they got, and more than they had hoped for. In fact they got so much change that the term change left a bitter aftertaste in their mouths. The reason for this was the amount of changes within the project. Sure, many citizens of Hamburg would like a mountain near, as a destination, or as a refuge to hide from the Lion King currently residing in Steinwerder. Sadly they got a money pit, and a deep one at that. 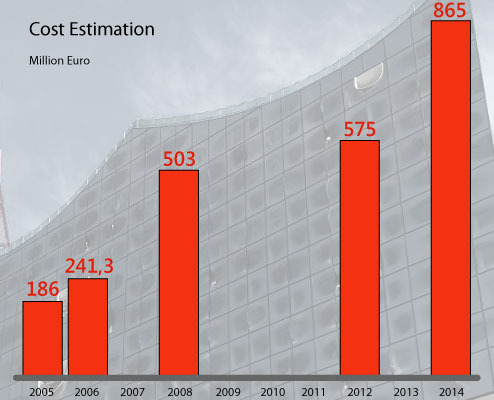 The only way is up!

The increase from 186 million euros to 865 millionen euros (as of 2014) equals 365 percent. Wat hest du seggt? (What did you say) many citizens of Hamburg said. How can this happen? How can a project spiral out of control so much that the Elbphilharmonie is a long way from being opened fours years after the originally planned completion? 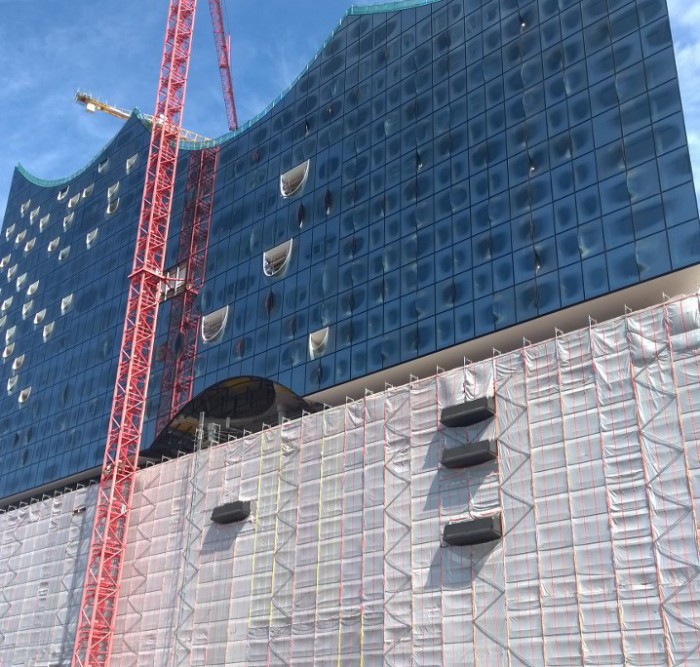 Even the Most Abortive Project Begins with a Single Step

Political circumstances, i.e. pending elections were putting pressure on all planning efforts. At the time of the call for bids little was known about what it was that was to be build or who was going to pay for it. The only thing that was clear was that the thing had to be finished in 2010. When the search for a general contractor began neither the future users had been defined nor was the the planning finished. The result: Place holders became the basis for planning efforts. The project was to be initiated as soon as possible.

A defined process model, a structured approach would have uncovered pretty quickly that it does not make a whole lot of sense to begin a call for bids if the aim of the project has not been defined. Especially considering the fact that 70 to 90 percent of project costs are determined in the planning stage of a project. The contructors, in turn, have no interest in pointing out a flawed planning if they know they will profit from these flaws subsequently. Sadly, such an approach to projects is not uncommon among political employers. Even the perfect process model pales in comparison to the power of politicians wanting their object of prestige finished within a timeframe relevant to their political lifespan.

Step 2: Countless changes during the course of the project

I could write an entire blog post about adequately planned and implemented but still highly questionable decisions. For instance, the more than thousand windows, each of them weighing one and a half tons and costing more than 20 000 euros, or the 2100 chairs for the concert halls, each of them costing 1000 euros. Or the integration of 45 condominiums, market price 35 000 per square meter. That is, well, cost-intensive, even for Hamburg standards. Mutations may be a more fitting word for describing all the changes during the project. A few examples:

Word exists of more than 3500 major changes since project initiation in 2006. A striking example: In December 2011, five years after the start of construction, completely new construction plans were introduced for floors 10 to 17 due to new fire protection regulations. If project management was music the Elbphilharmonie would be free jazz.

Basic project management knowledge was ignored at every turn it seems. How can a project be in full swing before requirements have been adequately elicited and the stakeholders have been determined? In other words: A major project was initiated without having so much as a slight overview of the essential elements of the project. One or two requirements diagrams, system context diagrams or goal diagrams would have done the trick. Or at least a few lists with comparisons of effort and benefits. Any tool would have made obvious that something was very wrong.

The preceding example may also serve as an example for the misguided communication within the project. The new fire protection regulations als included a new cooling system to be installed in the walls instead of the ceiling. “These plans are impossible to implement”, said general contractor Hochtief, adding that until this and other issues have been resolved all work on certain project areas had to be discontinued. It is the building owner’s job to work over the design in order to make them realizable, they said. Architects Herzog & de Meuron denied this. The reasons for the lateness are the delayed execution and subsequent plannings by Hochtief, they added.

Michael Knipper, Chief Executive of the Central Federation of the German Building Industry, said: “All participating parties have basically worked in parallel without any control or coordination of efforts. […] There was no general responsibility defined. […] This lack of coordination in combination with the large number of changes lead to the massive problems”. Another reason for this was the fact that the architects were free to design the building and to change plans as they saw fit.

Project work is a must in school lessons. Hordes of aspiring teachers would never obtain their teacher training diplomas and certificates would they not present project work in some shape or form at least once in a school term. The basis for all project work, be it in school or in multi-million dollar projects, is communication. There seemed to be none of it in this project.

[This subheading has not yet been defined], or: An Attempt at a Conclusion

As is the case with many other large-scale projects, a great number of mistakes were and are made in the planning and realization of the Elbphilharmonie. It is even hard to arrive at a conclusion, let alone come up with tips on how to avoid such a mess. Apart from aspects already mentioned the following guidelines may be of help:

Change can be something really nice and beautiful. Maybe things change for the better and the Elbphilharmonie does indeed open in 2017. The first thing I will do then is take a plane from BER airport to Hamburg and attend the next best concert at the Elphilharmonie. Maybe Bruce Hornsby is playing, wanted to see him live for some time now.

“A journey of a thousand miles begins with a single step.” – Laozi, Tao-Te-King

Bruce Hornsby, Gonna Be Some Changes Made (Solo Performance): https://youtu.be/24gtrW4_BAs

Tips and information on all things Project Management and Requirements Engineering. Keep up-to-date for free!
Torn out of Context in Reverse at 50 mph