Innovation is in the middle of an extremely good run. Innovation is at the top of the management agenda. Through the digital transformation and the 4.0 hype, many companies feel forced to innovate while simultaneously enjoying the thrill presented by all the opportunities. But unfortunately things don’t always work that way – ideas and innovation have their enemies too.

Innovations are fascinating, just think back to the iPhone, Tesla or Nespresso. Novelty has its own appeal, especially if it provides some utility that has never been seen before. Everyone is convinced of the importance and necessity of innovations, if only as a means to beat out the competition. If the Massachusetts Institute of Technology (MIT) is right, up to 40 percent of the current Fortune 500 companies will have disappeared by 2025. And if you look at the young IT startups that are shooting out companies worth millions within a few years it becomes clear how much potential for innovation there really is.

But innovation has many enemies too

Mark Twain once said: “People with a new idea are only considered crazy until that idea has been implemented.” And, to add a quote by Albert Einstein: “A truly good idea can be recognized by the fact that at first it seems impossible.” Bottom line: Ideas are all hard to implement in the beginning.

Despite their fascination ideas and innovations face a lot of opponents at the beginning. This is underscored by the fact that 60-80 percent of new innovations fail – the exact number is hard to pin down because no-one likes to talk about flops. There are two reasons for innovation missteps:

Innovations are like small, delicate plants that require a lot of care and protection in the beginning. The innovation plants are not only weak to start with, they also have the most enemies during this phase. Here are the most popular killer phrases (German only):

These are not called killer phrases for nothing. They kill in the truest sense of the word. They murder the idea and take courage and motivation down too. Many people don’t realize what a few simple words can do.

5 reasons why innovations falter on an internal level

Why is there no receptive culture for new ideas? There are particularly high barriers in large, established corporations. The internal blockages and the ignorance towards novelty can be traced back to structural and cultural issues. Here are several reasons why innovations fail.

Established companies tend to struggle with internal structures that suffocate innovation. Those include:

Spontaneity and agility are not properties often associated with large corporations. Innovation gets delayed because corporations want to minimize risk, leading to analysis paralysis. That’s what happens when we analyze so much that we end up doing nothing because every round of deliberation yields new results which in turn raise more questions requiring even more analyses.

The daily grind is one of the biggest enemies of innovation. Things that we earn money with today have a higher priority than innovations with which we will garner profits tomorrow.

So it appears that companies have to contend with a conflict: efficiently using what already exists (daily grind) while making new discoveries (innovation). Achieving both requires different processes, settings, cultures and competencies. Organizations that manage to do so are called ambidextrous (German only).

4. Safely in the comfort zone

Whether we admit it or not, none of us like leaving our comfort zones. Even though we all say we want change and innovation, no one wants it to start with them. That is to say, we tend to experience change as a disruption. Routine and familiarity make life much simpler.

Particularly German speaking cultures are especially unenthusiastic about changes. We notice problems, risks and limits to the idea first and are eager to brandish our killer phrases. By contrast Silicon Valley’s motto is “when in doubt, go for it”- no matter how weird the idea might seem. They have an optimism when it comes to opportunities that has enabled companies like twitter, Uber & Co to be so successful. Here in Germany we tend to have to constantly defend our ideas. That sucks a lot of energy and courage from the staff.

A little Silicon Valley mindset for everyone!

There are many books about the Silicon Valley mentality (German only) that offer inspiration. 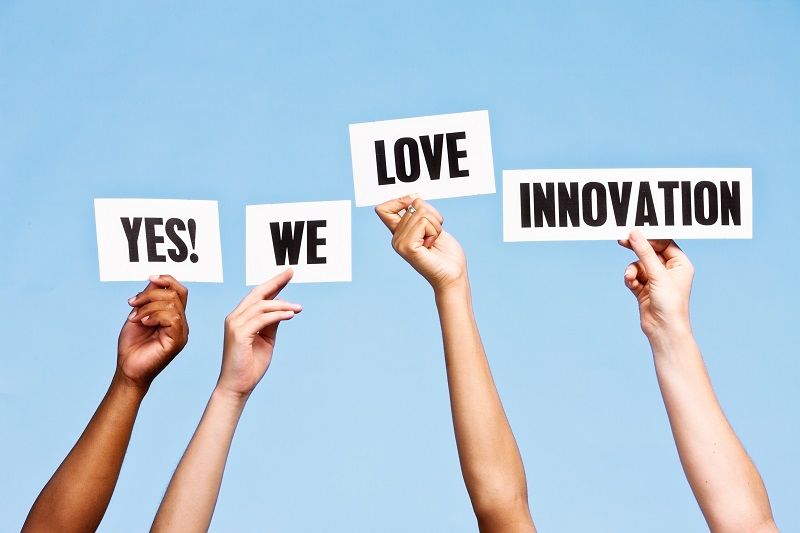 Innovation is and requires a mindset

Startups are without a doubt today’s innovation smiths. They operate under conditions which allow innovation to flourish:

Even if big companies cannot copy these conditions, they can still imitate the startup attitude. But it’s not just enough to loosen your tie. Many companies already work with startups and use some startup (German only) methods such as design thinking (German only) or lean startup.

Innovation is an advanced discipline in business leadership. It brings an endless number of opportunities and challenges.

Most ideas do not fail because of technology  (German only) or processes, rather because of people. That’s why cultivating a positive attitude is necessary for becoming more innovative. A positive innovation culture (German only) must guarantee that ideas are born, that they are welcomed and pursued until they succeed. Innovation is and requires a mindset.

If you want to build a ship, don’t drum up people to collect wood and don’t assign them tasks and work, but rather teach them to long for the endless immensity of the sea. (Antoine de Saint-Exupéry)

Tips and information on all things Project Management and Requirements Engineering. Keep up-to-date for free!
The “I“ in TEAM