The class diagram. A structured path towards systems. 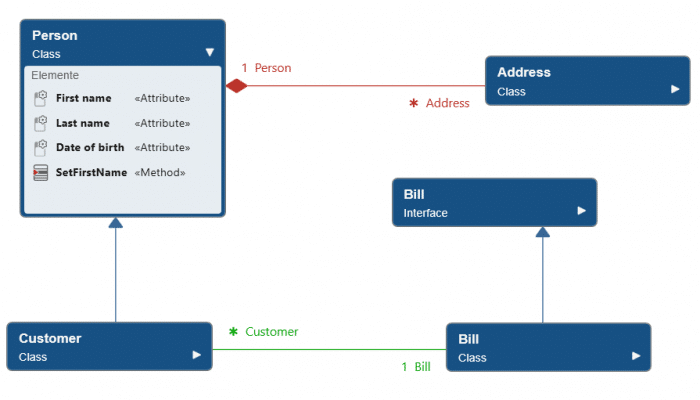 What is a class diagram?

Class diagrams describe systems by  illustrating attributes, operations and relationships between classes. Unified Modeling Language (UML) calls them structure diagrams. They work according to the principles of object orientation. This orientation describes how objects interact with each other.

Class is a term for the collective structure and the combined behavior of objects (classification). In other words: objects are included in a class if they have similar properties – i.e. the mutual properties in specific objects are grouped into a single class.

What is a class diagrams used for?

Class diagrams give you the ability to create models with the help of UML using attributes, relationships, operations and intersections. A class diagram visualizes the paths between classes in the form of aggregations and associations as well as through the passing on of properties and behavior between classes. These take the form of generalizations.

Class diagrams are the most important kind of UML diagram and are vitally important in software development. Class diagrams are the best way to illustrate a system’s structure in a detailed way, showing its attributes, operations as well as its inter-relationships. Classes play a significant role in object orientated programming languages – they are indispensable when it comes to software modelling.

Why is the class diagram so important?

Class diagrams are at the heart of UML. They are based on the principles of object orientation and can be implemented in various phases of a project. During the analysis they appear as the domain model where they attempt to create a representation of reality. During the design phase the software is used to model software, and during the implementation phase it can be applied to generate source code. Class diagrams are a vital part of any software development project and they form the foundation of all software products.

The class diagram represents the static structure of systems. It illustrates classes with their attributes, operations as well as their statistical and logical inter-relationships.

Create your class diagrams easily with the right tool.

A class represents a large amount of objects (class instances), that have the following in common:

Attributes are a class’s properties. Ideally they are only dependent on one class, although their attribute values can vary greatly.

An operation is a functionality that creates classes. Operations are the behavior of a class, or its objects, and are implemented using methods. An operation accesses attributes and can change them.

Interfaces refer to special classes that account for a particular percentage of externally visible behavior – mostly model elements such as classes and components. Interfaces are treated like classes but function under the name “interface”.

Relationships within the class diagram

There are four possible types of relationships within class diagrams.

Association describes the communication between two classes. A multiplicity illustrates the various possibilities available and is expressed in a minimum and maximum value. The term cardinalities is also used in UML to describe the number of actual manifestations. The term cardinality originally comes from data modelling and has the same meaning as a multiplicity in UML. The cardinality describes, for example, the exact number of associated objects in an object model.

An aggregation describes a partial relationship. An aggregation illustrates how the whole is comprised of parts. The relevant classes have equal value. Aggregations are represented by a line and an arrow between two classes as well as with a # sign. This symbol can be seen on the aggregate’s page – referring to the whole.

A composition is a strict form of aggregation. It differs from it in that the existence of an object which is part of the whole, is dependent on the existence of the whole. In that regard an object can only be part of, at most, one whole (multiplicity 0..1 or 1). Dependency in this context refers to the entire life cycle of various parts – that is, the object, which represents the whole, also takes responsibility for the entire life cycle of the objects whose parts it represents. If the whole is deleted then the objects that belonged to it at that point also disappear.

The advantages of the class diagram

Class diagrams give you a sense of orientation. They provide detailed insight into  the structure of your systems. At the same time they offer a quick overview of the synergy happening among the different system elements as well as their properties and relationships.

Class diagrams are simple and fast to read. With the right software they are also easy to create. They are the foundation for creating systems.

Once the structure of your system is defined then you are well on your way to developing new software. But this structure must now be made available to your developers. The further development of your results will determine whether your efforts in creating a solid structure will bear fruit.

Ideally you should use the right tool so that everyone in your team can use it. One that makes all the results of analyses and investigations available to everyone in real time.  Read more >>