The System Context. The Foundation For Your Products.

What is the system context, why is it important and how do you keep track of your system? 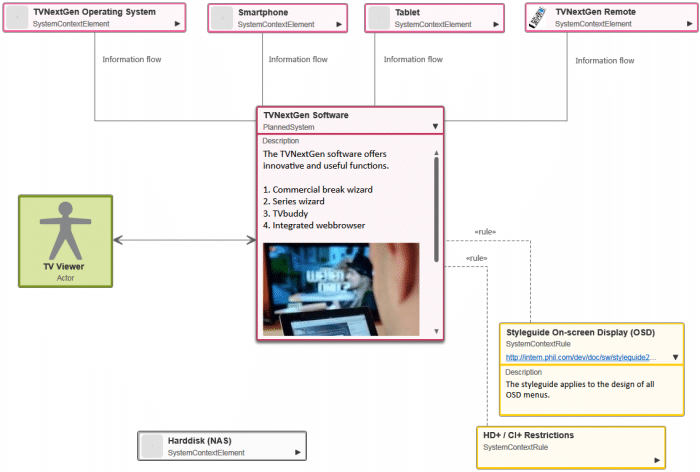 The planned system element is at the center of the diagram. It represents the system to be developed, describes the scope and the system’s functions.

Actors are users, devices or neighbouring systems that interact with the system.

Laws, norms and other documents can have an impact on the system. They are connected to the system through a rule relationship.

What is the System Context?

The term system context refers to the environment of your system. A system to be developed never stands on its own but is connected to its environment.

In the example above you see an example for the system context of a software installed on a television receiver. This software interacts with a number of devices, other software and of course the viewer. In addition, during its development process a number of laws, norms, guidelines and style guides have had an impact on the final design of the system. In reality your might define a requirement for the software that it may be barrier-free, or that it offers support for all current smartphone operating systems. This poses no problem if these elements are included in the system context analysis right at the beginning of a project. Supplementary changes late in the development process result in technical modifications that are difficult to implement and expensive. Maybe an incomplete product has to be marketed and sold.

The demarcation of the system context answers three vital questions

Try our tool for free

Why is the system context important?

How do you keep track?

The aim of system context analysis is to determine all persons, groups, organizations, processes, events and documents relevant for a system. Demarcating the system boundary defines what functionalities a system is supposed to offer and what interfaces to external systems exist. System context diagrams offer great help for depicting relationships between all aspects of a system. Depending on the type of diagram additional information, e.g. descriptions, information flows and interactions can modelled and included. The end result is products that satisfy users and offer all the desired functions.